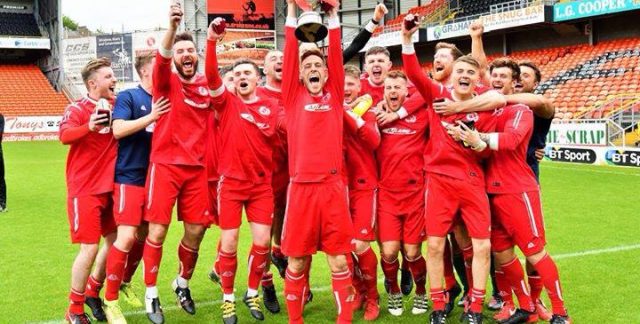 Carnoustie based, DJ Laing has been announced as Arbroath Community Sports team’s main sponsor for next season.

The locally-recognised DJ Laing name and logo will be emblazoned across the new shirts when the under 19’s team launch their new kit at their first home game against Riverside West End.

Linda Webster, Chairperson of Arbroath Community Sports Club, said: “We currently have 15 teams aged from six to 20-years-old playing on a weekly basis. It’s been an uncertain time for many people so we’re glad to get back playing and look forward to a successful season.”

“We appreciate the support from our sponsor who has generously provided funding and we’re delighted that another strong local brand will feature on our Under 19’s kit”.

“With a local business providing sponsorship, that benefits not just one team, but the entire club and we can’t overstate how important relationships like this are to the sports club plus the important contribution from our committed volunteers, who do so much for the Club.”

Karen Nicoll, Managing Director of DJ Laing, said: “Having worked at Muirlands Park in Arbroath for the past 3 years we were delighted when our team member, Martin Tosh approached us to support his football team”.

“As a family-owned and managed business we know how important it is to form partnerships within the local community and it’s fantastic we can get behind Arbroath Community Sports Club in this way.

“We are keen football supporters so we are pleased to support anyone interested in the sport and hope the team does well in the new season.

The company has a keen interest in supporting local causes and is main sponsor of Carnoustie Panmure FC, the DJ Laing East Region Cup and many other community projects.